Since 26th October 2001, I have been planning a course of action which will lead to the takeover the BP Group for aesthetic reasons. British Petroleum is a public limited company which maintains several oil drilling facilities in the North Sea and is also heavily involved in the worldwide trade in crude oil and oil products. You too have almost certainly bought petrol from BP.

My complex and indeed difficult takeover plans were conceived during my annual holiday in the summer of 2001 in the resort of Julianadoorp in the Netherlands. While building sandcastles together with my daughter, I came upon several pieces of a black, slippery, tar-like substance, which upon inspection, turned out to be washed up oil residues. These had the tendency to stick to one's feet, in particular between the toes, under the great heat of the summer sun. It was then that I decided, for ecological reasons, to collect this waste oil in a plastic bag.

Today I paint with tar, I am a crude oil painter. 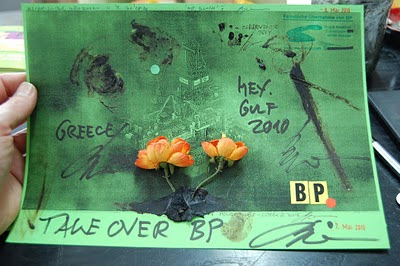 Deephorizontal impression in Oil is an art work with real peaces of CRUDE OIL.
I collect tar and oil pollution from all coasts and beaches I can reach. I work with all these slippering tar and offer each crude oil work to sell at the art market. From the money I earn, I buy shares of British Petroleum.

In a few years I will takeover the whole company by its own pollution.
You can support my plans, if you buy my works for a better world.

It’s time for each state to put ALL OIL COMPANIES under control, which gives the government authority to devide the risks, to earn the money.
Oil has to be public property – like clean water and fresh air.