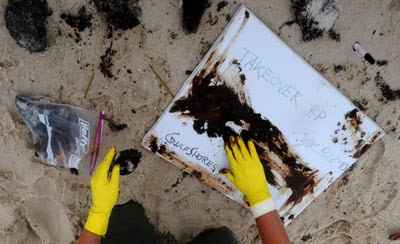 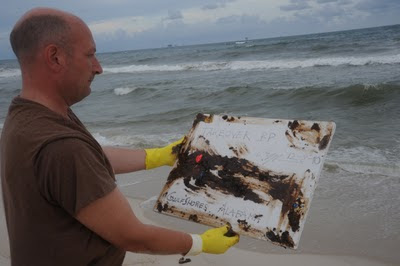 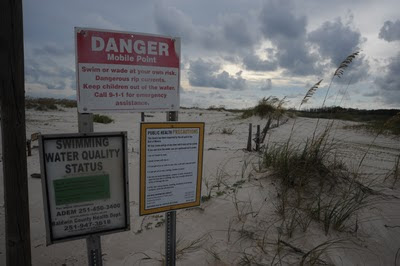 Yesterday I visited Dauphin Island and Gulf Shores, Alabama. First I found small tar pellets on the beautyful Island and some balls of bitumen. At East End I was stopped by security. 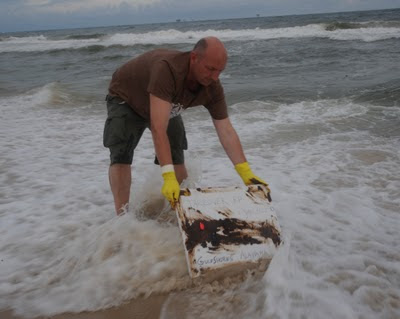 It wasn´t allowed to cross the border to the area which had been heavily polluted by a storm the day before. They built sand berms against the oil spill there.
I collected enough oil closed to the forbidden area. The tar sticks on plastic bottles and oil clumps are mixed up with mussels and small stones. Some Streets at Dauphin Islands were cut short by hurrican Katrina . They lost more than 300 houses. I found the beach empty and lonley. But in fact you can swimm if you want. 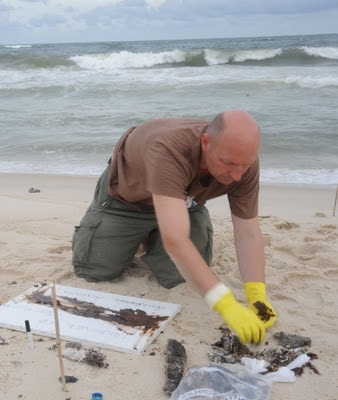 Than I took a ferry boat to Gulf Shores. The very nice owner from the Lighthouse Bakery gave us the tip to search for oil at Orange Beach. A sizable spill reached the beach there in the morning hours.

Anyway Burkhard my fotografer and me - we swam in gulf and the waves had been great!
We stopped at Bon Secour National Wildlife Refuge near Gulf Shores.
Here I found a good setting for oil paintings. I collected slippery slick and oil pellets. Some stuff was older - some fresh. Good for my canvas - bad for sea turtles.


It is time to takeover BP
NOW!